Adagio is a guitar and flute or guitar and violin duo that specializes in elegant, classical acoustic music for intimate performance spaces, such as wedding ceremonies, cocktails, dinner events, or entertainment at wineries and upscale restaurants.

Bungle in the Jungle – Tull

Fiddler on the Roof – standard

Somewhere Over the Rainbow

All The Things You Are

As Time Goes By 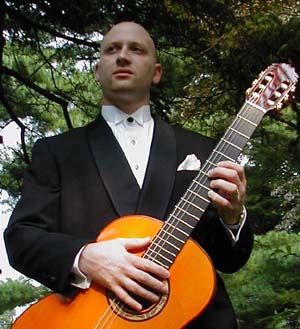 Guitarist Scot Silver majored in classical performance at West Chester University from 1987 to 1991. He earned the Hal Simons Memorial Award for Excellence in Music. Scot studied under Glenn Lyons while performing with the West Chester Classical Guitar Ensemble.

Scot advanced his jazz and pop playing through studies with Chuck Anderson. During that period, he began writing for both band and solo guitar. More about these projects can be found on ScotSilverMusic.com.

For Adagio, Scot is joined by one of two excellent performers, BelMary Lorcas or Rebecca Simon.

BelMary is originally from Venezuela where she was part of the Internationally acclaimed “EL SISTEMA” and the Simon Bolivar Orchestra and Conservatory in Caracas. She has lived in the USA for over 15 years where she received her Master Degree in Music Education from Carnegie Mellon University. She is a Suzuki certified teacher with an extensive career in music education and performance. An active chamber musician, Ms. Lorcas has participated in recitals and music festivals in different venues in her native country as well as in the Philadelphia area.

Since she moved here in 2004, BelMary has been an active member of the Suzuki Association of the Americas, Greater Philadelphia Area Suzuki Association, is the Suzuki Academy Coordinator of the Community Music School in Collegeville, PA , performs with the “Gaudeamus Ensemble”, where she and Scot first met. Mrs. Lorcas is an active collaborator with “Casa de Venezuela” a non-profit organization for the Greater Philadelphia area. She has been performing with the “Ensemble Casa de Venezuela” since 2004 promoting and sharing her love for the folklore of her homeland. Since the Fall of 2013, Ms.Lorcas joined Arconetwork organization as the Junior Ensemble Conductor of the Elite Strings Program.She further joined the faculty team of Christopher Dock Mennonite High School in Lansdale,PA. Each summer BelMary is an a performing guest with the Chamber Art Music Festival in Madrid, Spain.

Rebecca Simon is a freelance performer and teacher in the Philadelphia area. She is the Professor of Flute at Wilkes University in Wilkes-Barre, PA. She is also on the faculties of Suburban Music School, Germantown Academy and Nelly Berman School of Music. She maintains a busy teaching schedule of over 40 students. Rebecca is an active performer and chamber musician. She plays with the Orchestra Society of Philadelphia and is a substitute with the world-renowned New World Symphony. She has also played with the Lancaster Symphony, the Maryland Chamber Orchestra, and the National Orchestral Institute.

Rebecca completed her Master’s Degree in Flute Performance at the Peabody Conservatory in May of 1999. There she performed regularly as principal flutist of the Peabody Concert Orchestra, the Peabody Wind Ensemble and Mount Vernon Winds Woodwind Quintet. In 1986, she won the Maryland State MTNA Collegiate Artist Competition and was chosen as first runner-up at the regional level.